Wrestling State Tournament Results:
Rossview Boys and Girls culminated another great wrestling season by bringing home some hardware from the TSSAA State Individual Wrestling Tournament. 7 of our wrestlers finished their season by achieving All State status and placing top 6 in the state at their wrestling weight class.
Congratulations to 2022 TSSAA State Wrestling Medalist:
Gabriela Wilkinson- 3rd in the State.
Analise Jetter- 4th in the state.
Alyssa Adamo- 5th in the state.
Alexis Mize- 5th in the state
Katelyn McMillan- 5th in the state
Sammy Shires- The State Champion. Was voted the Most Outstanding Wrestler in the state of TN across all weight divisions. Finishes his season at 59-0. Is only the 2nd male wrestler to ever win a state championship in the history of Rossview.
Zack Duessler- State Runner-Up. Finishes his season at 55-5. Is only the 5th male wrestler in the history of Rossview to make it to the state championship match.
Coach Price- was awarded as the TN Girls Wrestling coach of the year, and the NWCA National Sectional (Southeast US) coach of the year.
February 27th, 2022

On February 18, the Advanced Choir recently performed in the Middle Tennessee Vocal Association Choral Festival. They received a superior rating on both their performance and sight reading. Their excellent performance qualifies them to be eligible to participate in the American Choral Directors Association State Choral Festival. 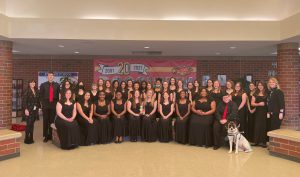 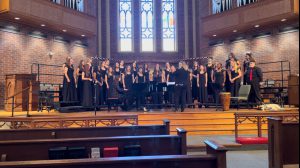 Congratulations to all of the CMCSS-athletes who recently competed in the TSSAA Girls Duals State Wrestling Tournament. For several years, the district has watched student-athletes achieve record-setting wins and pave the way for future teams. We are proud of the commitment and determination of our young leaders. This year, TSSAA offered the first sanctioned girls team state tournament in wrestling. Rossview High became not only Tennessee’s first girls wrestling state duals champions but also the first in the country.

Tryout packets will be available and must be completed by the deadline in order to participate in clinics and tryouts on March 21-23. 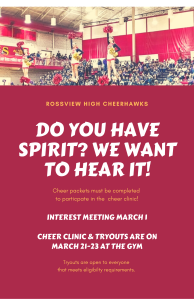 Congratulations to our boy wrestlers that placed at this weekend’s TSSAA Sectional State wrestling tournament at Hendersonville High.

These 5 boys along with our 11 girls state qualifiers will compete in the TSSAA State Wrestling tournament on Thursday, Friday, and Saturday against the top 15 individuals in each weight class across the entire state. So proud of our wrestlers and our wrestling coaches!

Congratulations to our boys and girls teams for bringing home the Region Championships!

Rossview Boys wrestling, for only the second time in school history, WON the TSSAA Individual Region Championship on Saturday night! Individuals that placed top 4 move on to the TSSAA Sectional Tournament next weekend at Hendersonville High.  Congratulations to our 10 BOYS Sectional Qualifiers!