On Saturday, February 13, Duke University hosted a virtual certamen event open to Latin clubs around the nation. In certamen, teams of four compete in a quiz game covering Latin, mythology, Roman history/culture, and more. Rossview’s Wyatt Roder entered alone and was paired up with one other student from Holy Trinity Episcopal Academy in Florida. Despite being outnumbered and total strangers, the two of them took first place in the Latin 2 tournament, beating national powerhouses Northside College Prep and Brookfield Academy in the finals. Additionally, Wyatt was named the MVP of the Latin 2 tournament. 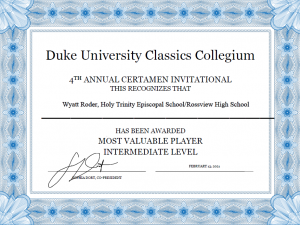 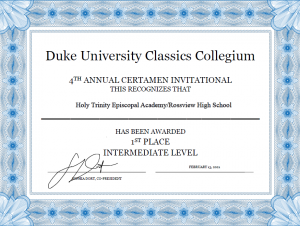